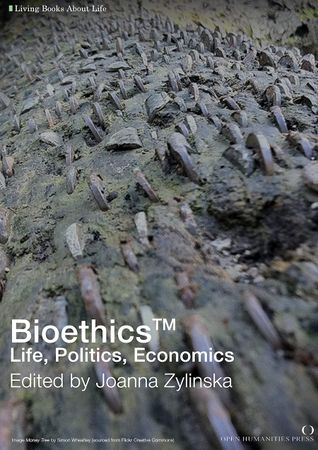 Introduction: Bioethical Mutations in the Age of Capital[edit]

Bioethics is a serious business, in every sense of the word. A sub-domain of philosophy which deals with issues concerning life and health, it has to arbitrate not only over practical matters regarding patient care and medical experiments, but also over the very ontology of ‘life’: its manufacturing, patenting and redefinition in and by the biotech industry. Since bioethics functions as a node in the complex nexus of social, political and economic forces, it is perhaps not surprising that technocapitalism does not want to leave it just to philosophers. Instead, it mobilises a whole army of experts: morality salespeople, ethics technicians, value mathematicians, to help us decide on the price of life. Consequently, bioethics increasingly abandons its more daring ambitions and responsibilities -- such as exploring the metaphysics of life or the politics of everyday survival -- to serve instead as just a ‘technical discourse about values clarification and choice’ (Haraway, 2007: 109). Its methods of working are thus principally procedural, akin to ‘facts and hypothesis testing’ in science (Haraway, 2007: 109). Feminist thinker Donna Haraway points out that medical ethics ‘is now a literal industry, funded directly by the new developments in technoscience. Ethics experts have become an indispensable part of the apparatus of technoscience-production’ (2007: 109). To put it crudely, bioethics’ role is often to get biotech corporations off the hook -- although, of course, it has the potential to be much more than that. Indeed, in its engagement with life in both a metaphysical and material sense, bioethics is conceivably one of the most exciting areas of philosophical interrogation and artistic experimentation today. (more)

The Commercialization of Medical Research and Patient Care[edit]

The Body as Property, Commodity and Gift[edit]

The Art of Life Between Speculation and Appreciation[edit]

To download a PDF version of this living book (in a slightly different incarnation than the 'living' version available online, and containing actual texts rather than links), right-click here, click on 'Save Link As' ('Download Linked File' on a Mac) and save it on your computer. You will then be able to read it offline or transfer it to your ebook reader. However, if you prefer to just read it online, click here.