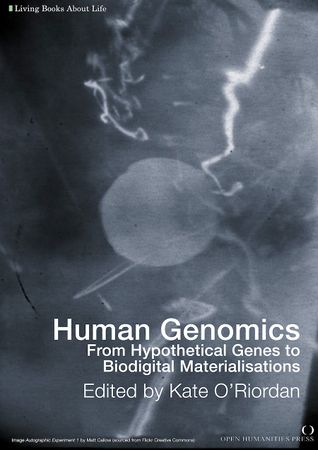 From Hypothetical Genes to Biodigital Materialisations

This Living Book provides a very partial cut through human genomics as both a scientific field and a consumer interface. The introduction has four sections -- New Genetics, Maps of Life, Bioinformatics, Individual Genomes -- each containing a selection of science articles as well as material from cultural studies of science and technology. (more...)

The genetics of the 1950s helped to signal a break from the associations that had been made between human genetics and forms of social eugenics in the late 19th century and first half of the 20th century. This period of ‘discovery’ science also lead the way in providing narratives of scientific heroes as ordinary guys (McNeil, 2011). This version of scientific discovery still resonates today, as genetic heroics were reproduced by Craig Venter and John Sulston during the Human Genome Project phase -- in biographies, autobiographies, popular science writing, news media and documentary. In 1953 Rosalind Franklin and Gosling detailed the distinctions between the A and B structures of the double helix in DNA, while Watson and Crick published their article on the structure of DNA.

In the 1960s and 1970s interest in cataloguing and mapping information about genomics came to the fore (Haraway, 1997). Such interest culminated in the Human Genome Project, but it had much earlier precursors.

In the early 1980s the technique called PCR – Polymerase Chain Reaction – was developed (see Rabinow, 1996, for an anthropological account). Kary Mullis won the Nobel Prize for his work in this area but his key article, ‘An Unusual Origin of PCR’ is not freely available and is only accessible via subscription. However, a far more detailed and accessible article in the Journal of Biomedical Discovery and Collaboration (Fore, Weichers and Cook-Deegan 2006) is included here. This article examines the effect that the patent on PCR had on its use in the sciences. This is a useful piece because it provides a review of PCR in the genome sciences but also because it considers two key issues in genomics with particular relevance for the humanities. These are the related issues of commercial science and patenting.The two issues are linked but not inseparable. Commercial companies and publicly funded research institutions both take out patents on inventions or discoveries. PCR is a technique for reproducing large amounts of DNA and this facilitates sequencing. Kary Mullis’s work on this area was developed in a commercial setting. Patenting and other commercial imperatives in the life sciences are part of the everyday reality of working in this area. Genomics is a 20th century science which has been developed within a highly commercialised system. The most controversial dimension of commercial practice in this area is not the patent on PCR per se, but rather concerns the question of the patenting of genes and of genetic tests. This area is discussed further in relation to DNA in general in The Ethics of Patenting DNA: A Discussion Paper (2002, Nuffield Council on Bioethics).

Bioinformatics has become the dominant paradigm for working with genomics in many areas. This does raise the question of who can make sense of genomics – biologists or computer scientists. The Exome paper below can been seen as one of the ways in which a debate about who is qualified to make sense of genomics is playing out. Jenny Reardon’s (2011) paper in Personalised Medicine (also available via Medscape) examines these tensions in the field and gives a clear picture of some of the stakes involved.

Haplotype mapping raises a whole set of debates and questions about race and human difference. This article sets out some of the later findings of the HapMap and demonstrates the kinds of typing that is going on in this area. For detailed accounts of the practices and challenges of this kind of human genomics see Jenny Reardon’s Race to the Finish and Amade M’Charek’s The Human Genome Diversity Project.

The Human Genome Project ran from the late 1980s to 2003 and produced the human reference genome. These two articles signal the completion of the so-called first draft, which was announced to the world by the leaders of the USA and UK governments in 2000.

In this article the direct-to-consumer genetics company, 23andMe, publish their results from self-reporting or crowd-sourced samples. These participant-driven studies potentially open up consumer-derived genetic databases and self-reported phenotypical information to biomedical research.